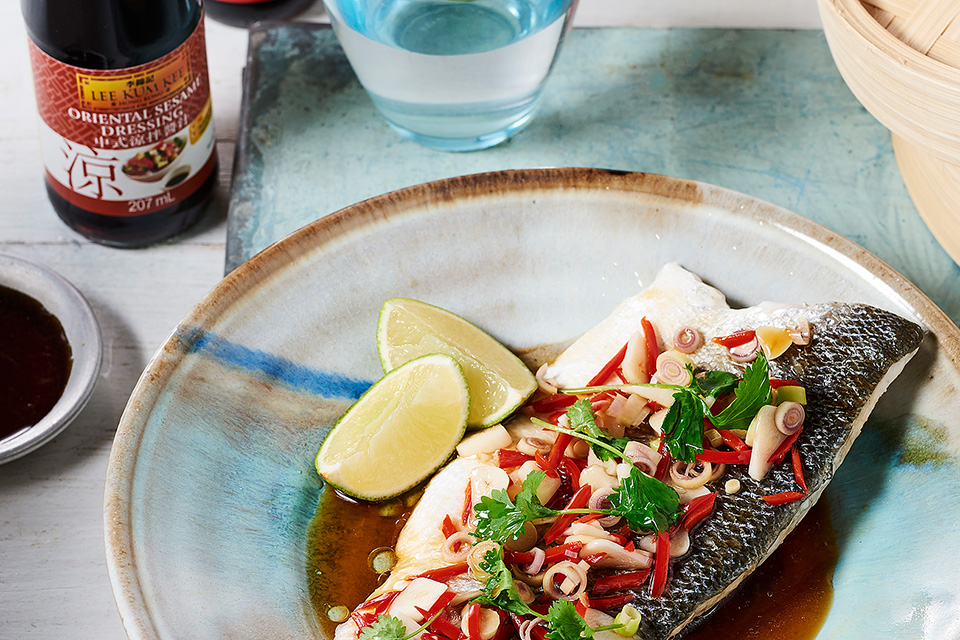 Steaming, the quintessential cooking method in Chinese and modern cuisine

Steaming is a cooking technique that, in Western culture at least, tends to be reserved for the cooking of vegetables; heating them to just the right level of tenderness and sealing in all of the goodness.

It’s more uncommon for meat dishes and fish on menus – and in homes – across Europe to be anything other than roasted, baked, fried, stewed or grilled.

In Chinese cuisine and Asian food recipes, it’s very much the opposite of this; and for good reason. Whilst vegetables often end up stir-fried in the wok, it’s the meat and fish elements of recipes that more often than not are steamed to perfection.

Historically, the steaming technique in Chinese cuisine was born out of necessity and convenience. Ovens were not commonplace in China, even ancient variations, and still aren’t in modern day society. Roasting techniques were thought to be labour intensive and didn’t make the most of resources; using lots of fuel and energy for a relatively small amount of food wasn’t conducive to a way of life that often involved mass-producing food for large families and communities with little resources.

Stoneware steam cookers have been found in China’s Yellow River Valley dating back to as far as 5,000 BC; showing just how long this staple cooking technique has been prominent in traditional Chinese cuisine. Fast forward to the present day and steaming is still favoured in Chinese culture and can be found in restaurants and homes in around the world serving up the cuisine.

Steaming is a very gentle and efficient cooking technique that seals in the taste and goodness of the ingredients. Taste is the very heart and soul of Chinese cuisine and as steaming is a moist cooking technique, it effectively locks in the flavour of a dish by preventing juices and excess moisture from evaporating and taking any nutrients away with it.

Meat, fish and vegetables are left bright and tender after steaming, rather than soggy and stripped of their goodness, as other methods such as boiling or poaching do. The vegetables are left as close to their original state as they can be, because the fibres are not broken down too much to create a mushy consistency. Dry heat cooking methods like roasting can also evaporate too much of the flavour in a dish and affect the true texture of foods by hardening them too much, which is why steaming is often the favoured technique in Chinese cooking.

Steaming is also one of the healthiest ways to cook, requiring no fats – like oil – to create the finished product. The time-honoured technique maintains the purity of the ingredients and, with meats such as pork, steaming removes the fat rather than sealing it in like frying or baking; so subsequently results in a lower calorie and lower cholesterol dish. Vitamins and minerals such as vitamins C, B12, thiamine, calcium, potassium and zinc are preserved and retained in the ingredients when cooking via steaming, unlike some other more conventional methods.

Finally, steaming is quick, convenient and results in little mess; there are no oil splashes to contend with, pans or trays with baked-on ingredients to scrub or smoke filling kitchens.

Steaming food in Chinese cuisine certainly isn’t reserved just for home kitchens, however. For restauranteurs, chefs and caterers, steaming is an easy way to mass produce nutritious, tasty dishes; lending itself well to the development and expansion of menus. As such, it’s a technique that is being used in menu development in restaurants and commercial kitchens across the world, and that is becoming more commonplace; despite the fact that dishes aren’t always described as such, they are being cooked in this way. 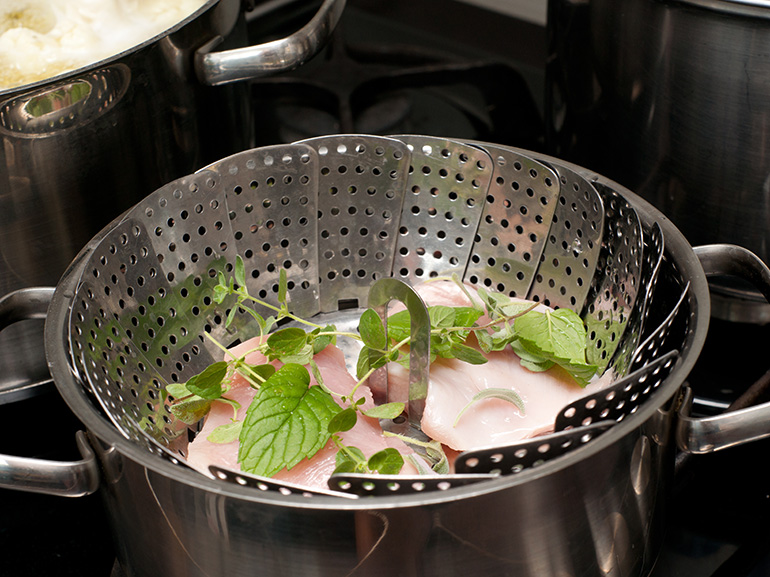 There are different methods of steaming used in Chinese cuisine and various means of creating these dishes; from the bamboo steamer or rice cooker to the more commonplace (in western society at least) food steamer. A wok can even be converted into a steamer with a domed lid and a raised support on which to place dishes for streaming.

Indirect dun steaming requires ingredients to be placed in a vessel with a tight cover, which is then placed on a support in a wok or pot with the water about half way up the outer sides. This is a popular way to cook medicinal or luxury soups and takes longer than direct steaming. It is sometimes called “double boiling”.

Direct zhen steaming doesn’t require ingredients to be covered once they are in the vessel and, as such, the food is exposed to the steam directly and typically cooks much more quickly. The vessel containing the ingredients has to be placed above the water level, usually at least 2-3cm above, to avoid flooding, and it should also be around the same distance (at least) away from the edges of the wok or steamer it is placed within, so that there can be good circulation of the steam.

Then, there are two types of direct steaming: clear steaming (qin zheng) and fen zheng, where the main ingredient of the dish – usually chicken or pork in this instance – is coated with rice flour or tapioca before it is steamed to protect it and keep the texture silky. The former, clear steaming, is most commonly used with fresh fish dishes or spare ribs and is one of the most time-honoured, classic dishes of Cantonese cuisine. The natural texture and taste of the fish is preserved with this method and only a small amount of shredded ginger and a light soy sauce and oil dressing needs to be added, or other toppings such as fine slices of shitake mushrooms or Yunnan ham.

A bamboo basket steamer is more frequently seen on the Chinese cuisine scene, especially in restaurants. Coming in different sizes and with varying numbers of tiers, each a basket of its own with slats in the bottom to allow the steam to circulate, bamboo steamers are easy to use and clean. Food with different cooking times can all be prepared at the same time, thanks to the layering effect which allows for the heavier and slower-cooking vegetables to be placed at the bottom (where the heat is highest) and other faster-cooking ingredients to be added in the baskets above. The protein of the recipe, such as the meat or the fish, can be placed on parchment paper in its own basket for easier cleaning later and to prevent smells from lingering. 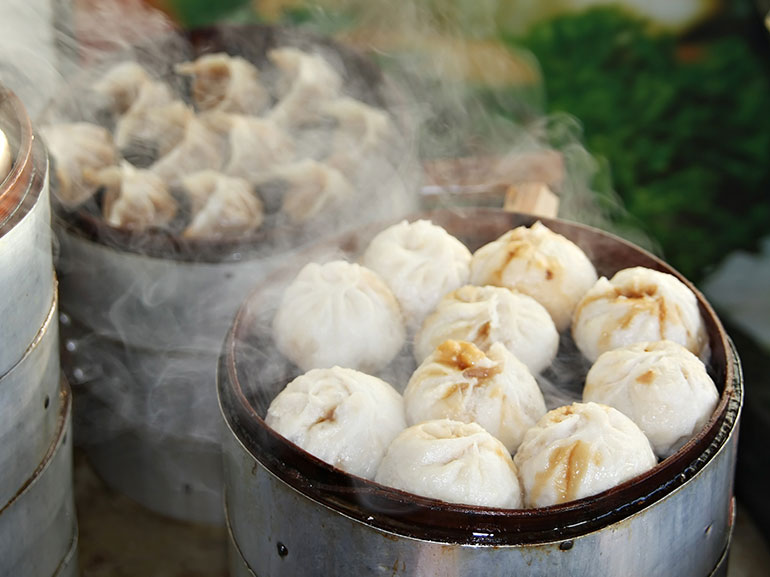 Steaming Dumplings in a Bamboo Basket

The number of dishes that can be made with this popular Chinese cooking method is endless. Steaming can be done with ease, but that’s not to say it is without skill. It’s not as simple as cooking ingredients over boiling water, because some dishes require a rapid boil and others a gentler simmer. The temperature of the steaming water is dictated by the main ingredient of the dish to ensure the texture remains perfect; for example, rapid boil is most commonly used for fish, breads and most cakes in Chinese cooking, whilst meats require a medium boil and eggs, just a gentle simmer.

This deliciously steamed salmon dish is a quick recipe where you can try out steam cooking.

The number of dishes that can be made with this popular Chinese cooking method is endless. Steaming can be done with ease, but that’s not to say it is without skill. It’s not as simple as cooking ingredients over boiling water, because some dishes require a rapid boil and others a gentler simmer. The temperature of the steaming water is dictated by the main ingredient of the dish to ensure the texture remains perfect; for example, rapid boil is most commonly used for fish, breads and most cakes in Chinese cooking, whilst meats require a medium boil and eggs, just a gentle simmer.

This deliciously steamed salmon dish is a quick recipe where you can try out steam cooking.